Today’s viewers and listeners are less tolerant than ever before of discriminatory or racist language, Ofcom research shows.

People also say they are more likely to tolerate swearing on TV and radio provided it reflects ‘real world’ situations and is set in the right context.

The findings are from new research on people’s attitudes towards potentially offensive language and gestures in broadcasting, the biggest study of its kind carried out by Ofcom.

The results are vital in supporting our broadcasting standards work to protect viewers and listeners, especially children.

The research used a mixture of focus groups, in-depth interviews, online surveys and discussions involving people from around the UK. It looked at 144 words, exploring what people were likely to find unacceptable, and the reasons why certain words were judged to be offensive.

For the first time the research also included six offensive physical gestures and included some newer and more obscure language than when Ofcom last examined this area in 2010.1

The research found that viewers and listeners take into account context, such as the tone, delivery and time of broadcast, when assessing whether offensive language is acceptable. People says they are more likely to tolerate some swearing if it reflects what they would expect to see in ‘real world’ situations.

Clear racist and discriminatory language was the most unacceptable overall. Such words were viewed as derogatory, discriminatory and insulting. Many were concerned about them being used at any time, unless they were particularly justified by the context. Many said that discriminatory and racist words were harder hitting, carrying more emotional impact than ‘general’ swear words.

Sexual terms were seen in a similar way to the stronger general swear words. They were viewed as distasteful and often unnecessary, but people said they found them more acceptable if used after the watershed, when they would be more prepared.

Most research participants recognised the importance of the 9pm TV watershed – the point from which broadcasters are able to start showing more adult content – and its role in protecting younger viewers. People agreed that Ofcom’s rules on offensive content helped parents and carers to assess what content was suitable for children.

Occasional, accidental strong language before 9pm was seen as more acceptable on live TV and radio than in pre-recorded material. People agreed it was sometimes hard for broadcasters to control live programmes, but they were less accepting if they felt broadcasters had acted carelessly or deliberately.

Swearing substitutes, and the bleeping-out of offensive language, were viewed as less acceptable when used frequently. The research found that most people would often understand which word was being substituted, and so the effect was similar to using the actual word being used, especially if it was repeated.

For the first time, the study showed that offensive language is generally seen as more problematic on radio than TV. People said they regarded radio as a more intimate medium, often on in the background at home, or where children could be listening without parental control.

“We set and enforce rules to protect viewers and listeners from potentially harmful and offensive content on TV and radio. To do this, it’s essential that we keep up to date with what people find offensive, and what they expect of broadcasters.

“These findings will help us strike a balance between protecting audiences from unjustified offence, especially before the watershed, and allowing broadcasters to reflect the real world.“

Ofcom has also published a quick reference guide to offensive words and gestures for broadcasters, to help them judge what is likely to cause offence.

Ofcom has a duty to apply standards which provide adequate protection to audiences from offensive and harmful content on TV and radio. If broadcasters air programmes that break the rules, and if the breach is serious or repeated, we can impose sanctions on them, including fines.

Despite the rise in popularity of on-demand viewing, live TV continues to have the greatest reach of all UK media, with 92% of people watching each week in 2016. Furthermore, nine in ten adults tuned into the radio, listening for an average of three hours daily.

Today’s research updates Ofcom’s previous studies – from 2005 and 2010 – on public attitudes to offensive language. It will also help inform our decisions during our investigations of TV and radio programmes that have included potentially offensive language.

The findings will be shared with broadcasters to help them better understand audience expectations about generally-accepted standards on TV and radio. Ofcom is also planning to publish similar research on audiences’ attitudes towards sexual content on broadcast services next year.

The full research is available here. Readers should be aware that it contains a wide range of offensive terms.

Below is an extract from the report: 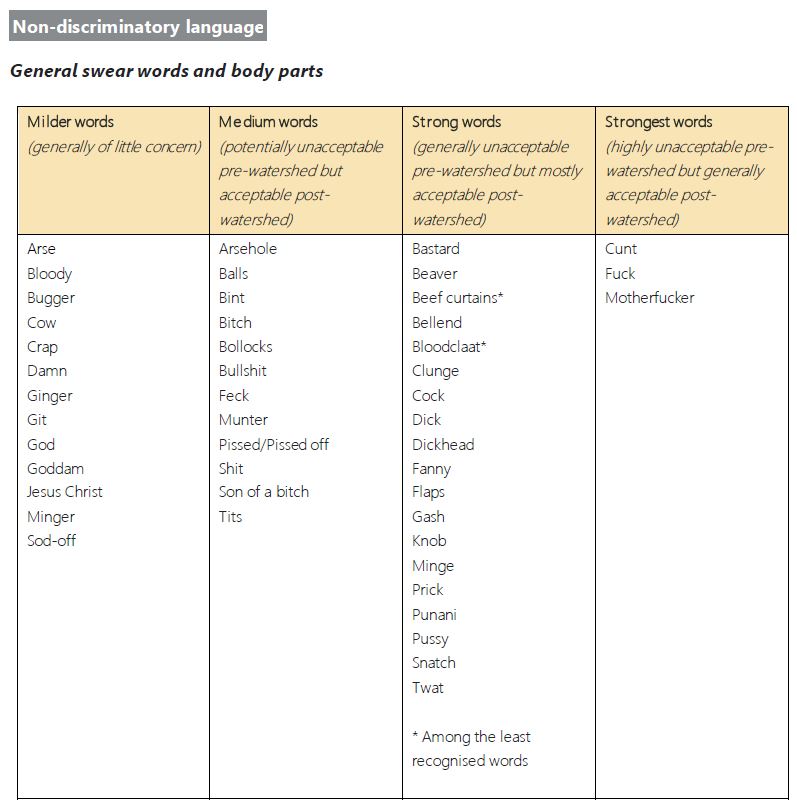 At LS Consultancy, we offer a number of distinct products and services which can be deployed individually or combined to form a broader solution.

We work both within individual teams and across many departments to offer a complete solution, with a range of cost effective, compliance and marketing solutions which are uniquely suited to supporting firms. Explore our full range today.