Ofgem proposes price cap to give 11 million customers a fairer deal for their energy.

Over 11 million more households on poor value default tariffs would be protected from being overcharged under proposals announced by Ofgem.

This follows Parliament passing the Government’s Domestic Gas and Electricity (Tariff Cap) Act, which became law on July 19 and gives Ofgem a duty and the powers to put the price cap in place. Ofgem is working to have the cap in place by the end of the year.

When the price cap is introduced suppliers will have to cut their prices to the level of or below the cap, proposed to be £1136 per year for a typical dual fuel customer paying by direct debit, forcing them to scrap excess charges for people on poor value default deals.

The exact savings each individual household would make will depend on the price of their current deal, how much energy they use, whether they have both gas and electricity and how they pay for their energy.

“Ofgem has made full use of the powers Parliament has given us to propose a tough price cap which will give a fairer deal to consumers on poor value default tariffs.

“Once the price cap is in place, all households in Great Britain covered by the cap will be protected from being overcharged for their energy. Consumers can have confidence that falls in energy costs will be passed on to them and if costs increase, Ofgem will ensure that any rise will be due to genuine increases in energy costs rather than supplier profiteering.

“Households protected by the cap will be able to save even more money by shopping around for a better deal. Meanwhile Ofgem will continue with reforms which aim to deliver a more competitive retail energy market which, combined with protection for those who need it, works for all consumers.”

Ofgem will update the level of the cap in April and October every year to reflect the latest estimated costs of supplying electricity and gas. This ensures households who are covered will always pay a fair price for their energy.

The price cap is designed to be a temporary measure, in place until 2023 at the latest. This will allow Ofgem to put in place further reforms to make the energy market more competitive and work better for all consumers, including making switching energy supplier easier, quicker and more reliable.

1. How much a customer will save is dependent on the level of the default tariff they are on with their supplier and how much energy they use. Customers on more expensive default deals than average would save even more while those on less expensive deals would save less. There are also different levels for customers who pay for their energy by direct debit and those who pay by standard credit. The table below shows the proposed average level of the default tariff cap, and the typical standard variable tariff savings for direct debit and standard credit customers for the largest energy firms. 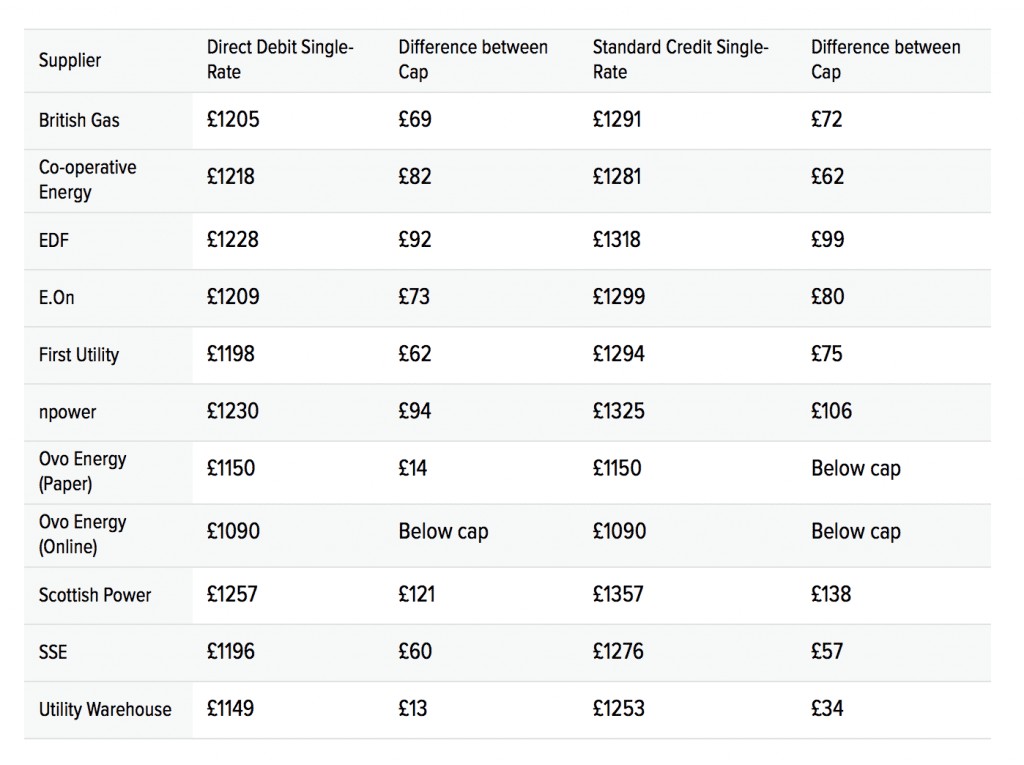 3. If the price cap was introduced this year we estimate 11 million households would benefit from the price cap, based on customer information from April 2018, including customers on standard variable tariffs and default fixed tariffs. This excludes customers already protected by the prepayment safeguard tariff and the Warm Home Discount safeguard tariff.

4. Vulnerable consumers. Ofgem has already capped bills through its safeguard tariff for 4 million pre-payment meter households. In February this year the regulator extended it to 1 million more vulnerable households on poor value default deals who already received the Government’s “Warm Home Discount”.
These Warm Home Discount households will be transferred onto the new price cap for direct debit customers, which has been designed for those on standard, rather than prepayment, meters.

5. Ofgem is aiming to confirm the cap level in November in time for the price cap to come in at the end of the year, subject to the statutory consultation process. The first update of the level of the price cap will be announced in February 2019 and come into effect in April 2019. Following this, it will be updated every six months.

6. Ofgem will closely monitor how suppliers treat their customers and make an annual report on the competitiveness of the energy market. This will be presented to the government, for the Secretary of State to consider whether the market is competitive enough for the price cap being lifted before 2023. The Secretary of State is required to make decisions from 2020 onwards if he considers the price cap needs to be extended (up to the maximum of 2023).

7. Over half of all households in Great Britain are on default tariffs because they have never switched or have not done so recently. Consumers are often automatically put on default deals, usually standard variable tariffs, when they come to end of fixed terms contract deals, with default deals typically more expensive.