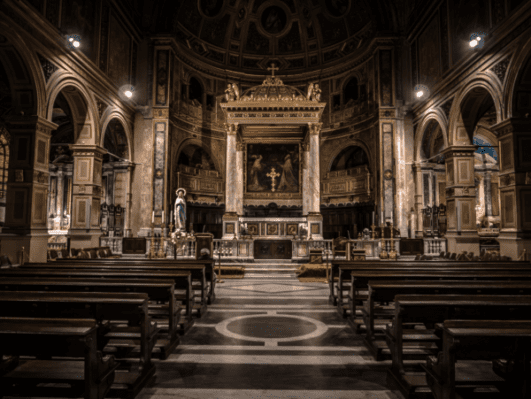 High streets and shops should be banned from advertising Christmas until December 1 in a move to restore “meaning” to the Christian festival, the former Labour Home Secretary, Lord David Blunkett has suggested.

Tis nearly the Season, and Oxford Street officially switching on their Christmas lights on Sunday November 6 and a number of supermarkets are already selling advent calendars and decorations.

Religion has always been an extremely sensitive subject, and references in marketing communications, including humorous ones, can potentially cause serious offence to the reader.

The non-broadcast Advertising Codes do not prohibit religious ads, although all religious advertising must stick to the same rules that apply to all advertisers.

When advertising marketers must not include anything that is likely to mislead, harm or offend. Adverts should also be prepared in a socially responsible way.

Adverts for broadcast media (TV and radio) have a specific set of advertising rules.  In summary, these are:

Marketers should ensure that they consider carefully the tone used and, if necessary, research the likelihood of marketing communications causing serious or widespread offence to followers of the faiths concerned.

Gentle humour may be acceptable when reflecting mainstream culture

It is quite common for the ASA to receive complaints about Christian imagery in and around Christmas, Easter etc.  For example, in 2014 the ASA received complaints that a Christmas themed ad referring to “all our stupid songs” was likely to cause offence because it mocked carol singing, an element of Christian worship. The ASA did not uphold the complaints, noting that the activity was part of British Christmas tradition, followed by both Christians and non-Christians alike (Kentucky Fried Chicken (Great Britain) Ltd, 5 March 2014).  Similarly the ASA chose not to uphold complaints about fashion ads that showed a man giving a woman a Mulberry handbag as a gift in scenes reminiscent of the Christmas Nativity story. It considered most viewers would understand it as a light hearted take on the Nativity story, intended to poke fun at the effect of consumerism on Christmas rather than mocking or denigrating Christian belief  (Mulberry Company (Sales) Ltd, 23 December 2015).

Be cautious when using religious imagery or language

The use of religious imagery or language may be considered acceptable, provided it is not mocking or disrespectful. Da Vinci’s “Last Supper” has been used in several ads and, although it has received complaints, the ASA rarely upholds them. An exception occurred in 2006, when the ASA considered that changing The Last Supper to show Jesus in a casino and his apostles playing roulette was likely to offend (Paddy Power, 11 January 2006).  Using religious imagery to advertise products or themes contrary to central or sensitive Christian beliefs is likely to be problematic. Another good example of inappropriate usage was an ad, placed in the run up to Christmas, for the morning-after pill. It was headlined “Immaculate Contraception?” and generated over 180 complaints by mis-using a fundamental Catholic belief (Schering Health Care Ltd, 22 December 2004).

Misleading claims can also cause offence

In 2006, the ASA considered complaints about a Gay Police Association national press ad that highlighted an increase in homophobic incidents, where the sole or primary motivating factor was the religious belief of the perpetrator; the ad was headlined “in the name of the father” and showed a photograph of a Bible next to a pool of blood. Over 550 complainants believed the ad implied that Christians were the perpetrators of the reported incidents. The ASA agreed the ad was likely to offend Christian readers (Gay Police Association, 18 October 2006).

References to non-Christian religions can be more likely to cause serious or widespread offence, either because of a lack of understanding of what might offend their followers or because non-Christian faiths are less established in the UK and might need to be treated with more sensitivity (Le Redoute (UK) Ltd, 4 August 2004).

If you are unsure how your activities fit within the rules mentioned within this article, please take advantage of our Advert Review service.

An extract from the above article has been taken from the Committee of Advertising Practice in relation to religious advertising and does not constitute legal advice.