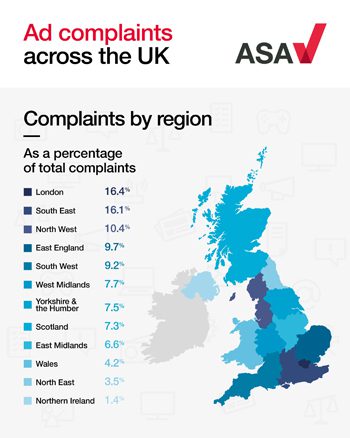 The figures also show a big difference between what appears to concern men and women, with men complaining more about misleading ads while women complain more about ads that they consider harmful or offensive.

The ASA also found that complaints about ads vary by region and country. Their figures show that people in England complained twice as much about ads than those in Northern Ireland. Consumers from Greater London and the South East of England were found to be the most likely to contact them with their concerns.

While complaints are a helpful guide to consumers’ concerns, the ASA gather information and evidence on advertising issues from a variety of sources – including consumer research and intelligence-sharing with other regulators.

As well as handling over 29,500 complaints from consumers across the UK, they are also on the front-foot in taking action to make sure ads are sticking to the rules. During 2015 the ASA proactively resolved a record 5,425 cases, treble the total for the year before. The result of all of this work was a record 4,584 ads changed or withdrawn (up 32% on 2014).

Commenting on the findings ASA Chief Executive, Guy Parker said: “The breakdown of ad complaints provides a fascinating snapshot of the issues that concern people across the nations and regions. It can only take a single complaint to stop an irresponsible ad. And it doesn’t matter who or where it comes from.

Complaints are just one way of helping us gauge public feeling. We also conduct extensive research, speaking direct to people across the UK about their experience of advertising.

That’s led us to spend more time on the issues that make the biggest difference to people, such as tackling misleading broadband pricing and exploring gender stereotyping in ads. Most ads play by the rules, but wherever there are problems we won’t hesitate to act.”

At LS Consultancy, we offer a complete solution with a range of cost effective, regulatory compliance and marketing products and solutions including Copy Advice  which provides pre-publication advice on advertising at any stage.