People in Liverpool spend more time chatting on the mobile than those in other major cities, new research reveals.

Ofcom’s Mobile Matters report analyses how around 150,000 people used their Android phone between 1 January and 31 March 2019. The study sheds new light on people’s experience of making calls and getting online on the move.

Overall, the number of minutes people spend on mobile calls has risen steadily in recent years. But Ofcom’s previous studies have also showed that younger people find making calls daunting, and prefer to use messaging services such as WhatsApp.

New research reveals a quarter of people made less than five mobile calls a month, with 6% of people not making any standard mobile calls at all. Of those who did pick up the phone, almost two-thirds (60%) ended the call in less than 90 seconds.

Ofcom compared how long people in 10 major UK cities spend on conversations from their mobile.

Liverpudlians came top, spending almost seven minutes on the average call – more than 40% longer than Londoners, who came second; and twice as long as people in Bradford, who had the shortest conversations. 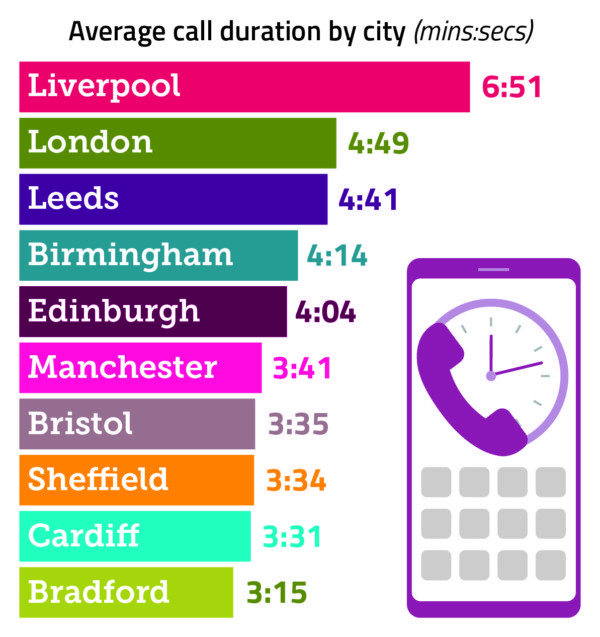 Online on the move

People increasingly expect to use their mobile to get online wherever they are – whether to scroll through social media, use online banking or stream their favourite TV show.

The new research, which helps Ofcom to understand mobile users’ needs, shows that they spend most of their time online connected to wifi (69%), rather than using 3G or 4G. This helps explain why more than half of us (60%) use less than 1 gigabit (GB) of mobile data a month, and only one in 10 (10%) use 5GB or more.

When people are using their mobile data, they are mainly connected to 4G (82% of time). And when they are in an area where a 4G network is available, they are generally able to get online whenever they attempt to (98.8% of the time).

Mobile data use peaks between 5 and 6pm, as rush-hour commuters look to catch-up with the latest news and scroll social media using their phone network.

“People use their mobile in different ways around the country. But whether it’s for going online or having longer chats, a good signal has never been more important.

“So people can take several practical steps to boost their reception and stay connected.”

While 92% of UK properties can get basic mobile reception from all four mobile networks, some people still struggle for a signal at home.

So as well as measures to boost mobile coverage, Ofcom has published a new online guide to offer help on improving indoor reception. There are alternative ways to make and receive calls if you have a poor mobile signal: